High up in the Wasatch mountains of Utah, part of the Rocky Mountains there is a mountain that Lords over all the other mountains, and the valleys in the area, this mountains is Called Timpanogos, the legend of Timpanogos says that an Indian maiden named Ucanogos went into the mountain to kill herself because she could not be with her young brave Timpanac, when she got there she could not do it, but word of her planned demise reached young Timpanac and he went looking for her, when he could not find her he leaped to his death, Ucanogos upon finding her love perished on the mountain jumped with him, and the mountain is named for the two of them, and when you look at the profile of the mountain you can see, after having it pointed out to you the image of a person laying dead.

In another version the names are Utahna, and Red Feather, the great God is Timpanogos, but the outcome is basically the same.

Sounds a little Shakespearean, from what I understand the name really means something like river of rock, which once you are on the mountain it kind of does look like a river of rock.

It has been over cast and stormy off and on for several days, on this particular day I decided to take my side by side and travel into the mountains hoping that the autumn colors had not been knocked off by the storms, some were gone and as you can see some were still there, in the image above I had stopped on what is called Cummings Parkway, a road that connects Snake creek canyon road with Cascade Springs road, both roads begin on the west side of Heber Valley near the town of Midway Utah, one to the north and one to the south, actually the south road begins in a small town called Stringtown.

As I traveled across the road I looked back at Timpanogos to see if there was the possibility of a photograph with the dark clouds, to my delight the clouds had begun to clear, some hanging in the valley known as Little Deer Creek to the locals, and the sun was trying to peek through, just warming up the east side of the pine tree in the foreground, and streaming across the fall colors still clinging to the aspens that grow in the valley.

The snow covered mountains, and hills in the area are a stark contrast to the autumn colors peeking through the new blanket of fresh white snow on the valley floor. 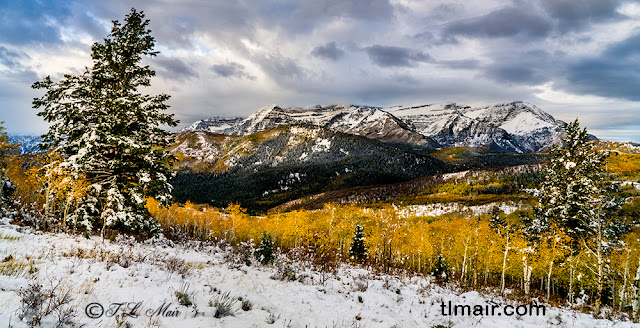 This image of Timpanogos was taken on the same day just a little earlier, and is taken from a view point in Mill canyon, which takes off from the Alpine loop road on the Wasatch side of the mountain.

Here pine trees frame Mount Timpanogos and add contrast to the blanket of snow that has come during the night, the storm clouds brood over the majestic mountain seaming to try and decide if they want to storm again, or clear out just enough to let the blue sky peek through.

This was one of those not so freak storms that come to the Wasatch mountains in the autumn, catching the fall leaves unaware and at times these storms can bring a fast end to the beautiful colors that adorn the mountains in the fall . both of these photographs are of what is called "the Wasatch back" and so the backside of Timp, I think we got the best side of Timp.

This area can be accessed a few different ways, two of which I mentioned above, another way is to take the highway that leads to Timpanogos national monument, then continue on this road which turns into what is known as the Alpine loop, the road climbs the steep mountain in a winding fashion the road is suitable for cars, but bikers love the road because of it's twisties! Once on the Alpine loop road you will come to a junction one way take you to Sundance and on to Provo canyon and highway 89, the other takes you to Cascade springs. The forth way is from Provo canyon up to Sundance then follow the signs to Cascade springs.

Thank you for reading!!

To see these and other photographs of this beautiful mountain click here!