One of the most fascinating animals on the planet, to me at least is the American Bison, we commonly call this guy a Buffalo. The Lakota call him Tatanka, a name which means "The one who controls us" because the Native Americans relied on this huge beast for the lives, he gave them food, and clothing in the way of Bison blankets, and robes, so in a sense he controlled them.

I just wanted to tell a couple of stories from encounters that I have had with these beautiful animals.

On one occasion my family decided to take a motorcycle trip to Yellowstone, two of my sons and I would ride the bikes to Victor Idaho, the place we stayed during the trip, and my wife, daughter, and daughter-in-law would ride in our van then get on the bikes for the trip into the park, we were traveling north on the upper loop road, highway 89 when traffic stopped, in Yellowstone when traffic stops you know there is an animal near the road, maybe it would be a bear, common when I was a child and we would feed them bread through a crack in the top of the window, we would lower the window just enough to slide the bread through and the bears would take it, now you hardly see a bear in the park so it's kind of a big deal, but nope this time it was Buffalo, the most common animal in the park.

As we neared where these guys were hanging out the van in front of us, not our van we were all on the bikes, anyway this van stops and would not go further, instead he motions for us to pass him, as we made our way around the van there was the biggest head I have ever seen, with big brown eyes staring right at us, this HUGE bison was standing right on the yellow line in the road and we had to make our way around the van, between it and the bison to go on our way, my two sons made it past and now for my wife and I, I just started to move and the bison moved to our side of the road, than stopped for just a moment then turned his head looked straight at us then shook his  head in a yes manner, as if to say "well are you going or not?" I took the hint and went past him, I was close enough that I could have slapped him on the but, believe me when I tell you these guys are huge!! 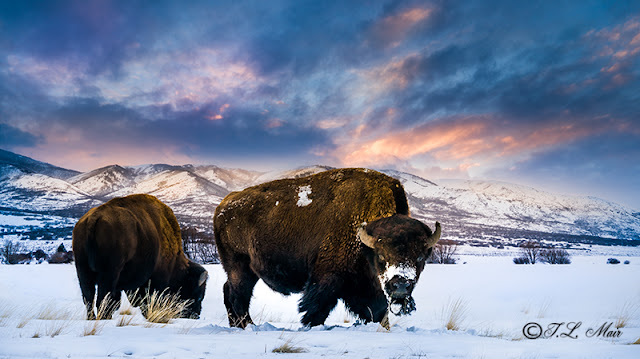 In the grips of Winter

Then on the same trip we came to another area where cars were stopped, this time is was bears, a sow with two cubs, they were quite a ways off of the road but you could still make out what they were, we stopped and parked the bikes, got off and moved through traffic, which of course was stopped, so we could get just a little closer, then as we took our attention off of the bears and looked north we noticed a sizable herd of you guessed it Bison walking right down the middle of the road making their way around the parked cars, I got behind my bike, my children had already made to the other side of the road, and there right in the middle of the path of these giants was my wife maneuvering to keep a car between her and the bison, the driver of the car told her he thought she should just get in the car, my wife declined...at first, then seen the wisdom in what he was saying and jumped into the back seat of a stranger's car, the buffalo moved  by the bikes, around the car where my wife was hiding and on their way. On the return trip we did come upon another bison walking down the middle of the road but traffic did allow us to make a wide pass around this one, still nerve wracking!!

On another occasion my wife and I had planned our annual trip to Jackson, and the Tetons, we had driven up into Yellowstone national park for the day and in the evening, after dark were heading home, cars were again stopped but this time someone had had the unfortunate luck to actually hit one of these tanks with their vehicle, the car was gone so we could not see what kind of damage had been done to it, but it could not have been as bad as it was for the bison, he was dead in the road, there was a flatbed truck with a winch loading this beast, the workers were in the road and the herd of bison were still there, from time to time one of the bison would approach the workers, and another worker manning a spotlight would herd the animal away, I thought it was amazing that these huge beasts, an animal that makes you shake, and say a silent prayer  when passing them on a motorcycle could be herded, and driven away with something as simple as a spotlight, they would shine the light in the bison's eyes and turn them around, then by shinning the light to either side of them they could herd them where they wanted them to go, they would not cross the beam of light.

Anyway that is just a few of the things we have experienced watching these beautiful animals.

To see more of my American Bison photos click here!!