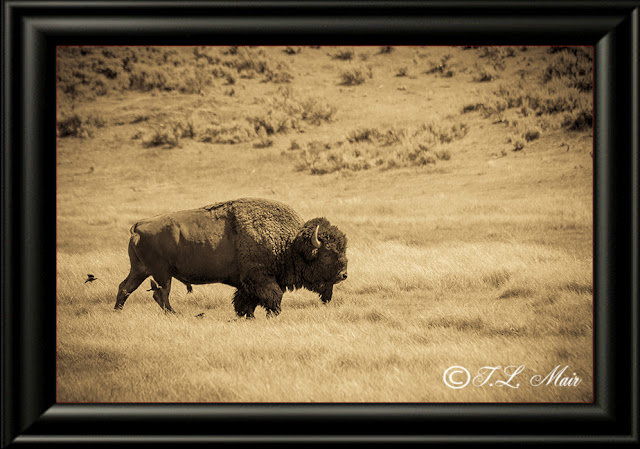 A few years ago my son Jason, and I took a road trip to Yellowstone National Park, we loaded up my old 1974 Chevrolet Corvette, which as it turns out isn’t the most comfortable car to travel in.

Our plan was to take a tent, and sleeping bags, and stay at KOA campgrounds as we went, after all we had done this in the past riding on motorcycles.

The first night we stayed in Victor ID. We got there, found the campground, and set up our tent, went into town to find something to eat, and returned to the campground, expecting to get at least some what of a good nights rest. It was terrible! The only thing we could figure is you get beat up a lot more traveling in a 1974 corvette, with those hip hugging seats than you do riding on a motorcycle, we never slept well, and everything hurt. The next morning my son called his wife, and had her book a cabin at the next stop which was in Cody Wy. Our plan was to travel through Yellowstone from the south entrance, go out the north east entrance, through the Chief Joseph highway, which is beautiful, if you have never been on that little stretch of road I would recommend going!!!  Peaks and valleys, winding roads, and breath taking scenery.

We got to the campground, checked in, found our cabin, what a treat we would be sleeping in a cabin, on a bed, woo hoo, it even had air conditioning, so we turned on the AC so it would be nice and cold when we got back, Cody isn’t nearly as cool in the evening as Victor. We went into town, found us something to eat, then headed back into the Chief Joseph highway, there was a lookout that I wanted to stop at and get some photos.

After the sunset we headed back to Cody, and to our nice cool cabin, well turns out they never exhausted the AC unit when they put it in, it pumped cold air out the front, and hot air out the back, I think the cabin was hotter than it was when we turned on the AC, all I could think was another miserable night at twice the price. If necessity is the mother of invention,  then exasperation is the mother of innovation, so I took the AC unit put it on a chair, and as I recall a couple of other thing to make it tall enough and shoved the exhaust out the window, problem solved!!

The next morning we headed west, and back into the park, the drive up and into the main park from the east entrance was a nice drive for the corvette, but the evidence of the great fire was still present, and so not photos on that side.

We decided to take a drive into the Lamar, pronounced “La Mare”  (I know, before the Scots changed the spelling our name used to be de la Mare, LaMar is an alternate spelling of that name!!!) valley, as we came out of the canyon where the LaMar river runs, and into the plains area there were tons of Bison, this one old bull kept herding the cows away from the other bulls, as they would move on, he would follow them, this is the old bull, I thought it was interesting how the black birds stayed with him where ever he moved, they would land on him from time to time, then fly away.

What a great reminder of the early days, when these magnificent animals roamed over vast tracts of land.

Some how, traveling in the same car as I, my son became ill, we believe it was from the son, because of course we had to top off of the car for most of the trip,  so on our return trip, which took us through Idaho Falls, where we stayed for the last night of our trip, we had to put the top on, and use the AC in the car, which by the way worked much better than the one in the cabin in Cody.

Thanks for looking, the copy write notice does not appear on ordered prints.
To see this and my other work, or to buy prints click here.