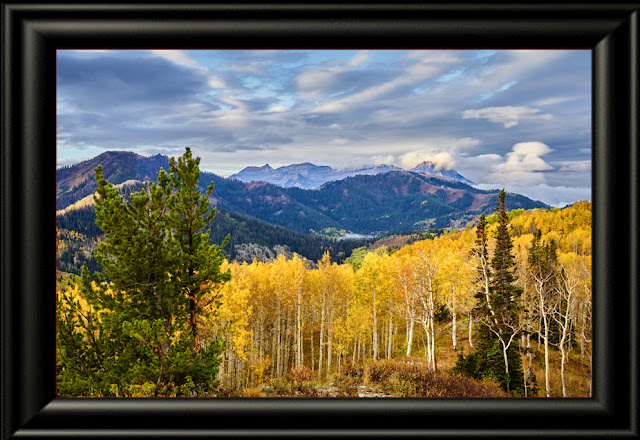 It was cold when we left the house, even colder once we arrived at the parking lot high up in the Wasatch mountains of Utah.

My sons and I had planned on doing a morning elk hunt,  we packed what we needed, and only what we needed, because of that I decided to leave my tripod at home, never a good idea, but one it seams that is always made when you know you’re going to be hiking where the air is thin, and the hills are steep.

We made our way in the dark up and around  a short section of the Great western trail, suitable only for foot traffic, and mountain bikes, not even elk use the trail as it turns out.

I will admit I had to stop several times along the hike to rest and catch my breath. Yes it’s steep, and I am not as young, or in shape as I used to be, oh the ravages of time, once near the top, and almost on what is known as “The Ant Knolls” we stopped to take a break, I guess the hike was wearing on all of us by that time.

As we sat there in the cold waiting for the sun to come up and give us a little warmth, we tried to be quiet, hoping to see or hear something that would tell us our hike was not in vain.  Not a twig breaking, or even a distant shot telling us of other hunter’s success, nothing.

As I sat there in the early twilight thinking to myself, the question drifted into my thoughts “What were you thinking?” and just as quickly the answer would come, and it is always the same for me “That’s the problem, you weren’t thinking!”.

As the twilight began to give way to the dawns early light, and the trees began to take form, rather than just shapes in the dimness, I decided to try and get some photos of the aspen trees that grow in the area, as I was looking for the perfect composition my boys took a short walk to the top of a rocky outcrop, they turned and motioned for me to come up, since I was getting nothing where I was I loaded the gear back into my backpack, grabbed my rifle and headed up the rocky slope.

Once at the top I was greeted with this amazing view, I had never been to this location, even though I live just a few miles away, it was amazing, to see the misty low hanging clouds drift through the high mountain valleys, and between the peaks of the more prominent mountains, from this location you can see Mill canyon peak, and the bear holes, Box elder peaks, both of them, with Mount Timpanogos in the distance, if you go to my website, and visit the gallery called “Mountains” you can see all of them.

Now it became abundantly clear to me that I should have left my rifle home, and taken my travel tripod instead. I took my camera, selected the settings that I thought would give me the best compromise between noise from the sensor, and camera shake from me hand holding the camera, I tried to balance the camera on the barrel of my rifle kind of like a monopod, but that did not prove to be a wise move, first the rifle is much to short to get the camera at the level I wanted it to be, and second it is much to wobble, you don’t know how wobble these things can be until you try to use them as a monopod!!!

I love the look and smell of autumn, the aspens were in full color up here, and the colors were bright from the bath they had received the night before. As you look out to the south west you can see Sandy Baker pass, and over that is Mount Timpanogos, in all her splendor. From this location you can see all of her peaks, and high mountain valleys, if you concentrate on the southern peaks you can just make out the face of Ogos as she lays in eternal sleep, waiting for her lover Timp to come rescue her from the icy clutches of the Mountain king.

Mount Timpanogos is the most prominat mountain in the Wasatch range, and can be seen from the Heber valley, and also from the Provo valley, and most all of Utah county, it’s name is an Indian word that means either water on rock, or river of rock, I have herd both, personally I like River of rock, mostly because when you look at it, and the other mountains that make up this range it looks like a vast river of rock, then of course as in all mountain lore, the stories abound, and we have the legend of Timp and Ogos, two Indian lovers that met their fate on this great mountain!!
Thank you for looking!!
To view this and all of my work click here.