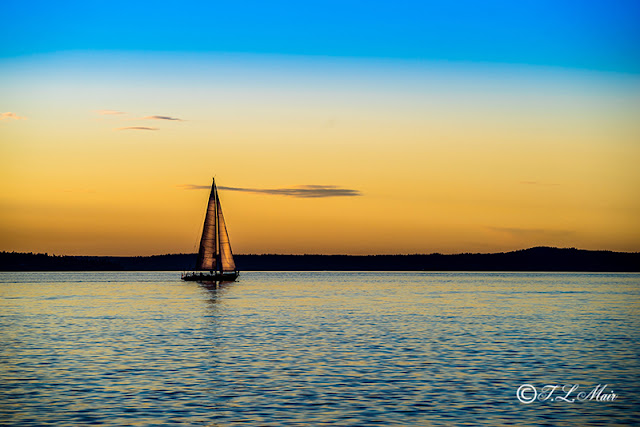 On the last day of our Washington trip, my wife and I stayed at a hotel in Seattle so we could be near the airport for our flight home, we decided to take a drive along the Alki  Avenue to Alki beach, the avenue, runs along the south side of Elliott bay, from this highway you can get a decent view of the Seattle skyline.

Once we got to the beach, and found a place to park the car, we got out and started to walk, and check out the beach, and surrounding territory. It is a nice beach, with cement steps that lead to the bay, I would imagine so people can go wading, or perhaps swimming, there was neither of those things going on because it was a little cold, we had gotten to Washington in the middle of a drought, but with the exception of a couple of days it rained the entire week that we were there.

The wind was blowing, and the water was a little choppy, I set up the camera, and waited for the light to start changing, as I was waiting a local came by and talked with me for just a moment, he told me this was the calmest he had ever seen the bay. That surprised me a little considering I had my camera on a tripod, and a bag of rocks hanging from the center post to help stabilize it in the wind!!

As the sun began to set in the west, and the storm clouds of the day dissipated this one sailboat, with it's American flag on the stern came sailing by, the waters calmed down, and the beautiful gold of the sunset lit the sails on the boat making it one beautiful sight on the waters of Elliott bay. It silently drifted by on it's way back to port. I wonder where it was headed, it could have been going to the Smith cove waterway, or perhaps , maybe even the pier, wherever it was headed it was a beautiful, and calming sight to see.

I loved our trip to , it was beautiful from the island in the north, to , and everywhere in between, beautiful green forests, and mountains on the peninsula that reached into the clouds, from the stormy seas that we viewed because of the winds, and the storms, to these Calm Waters.

If you get the chance you owe it to yourself to visit the .

Thank you for looking.
To see this and all of my work click here.