My son and I had planned a trip to Moab Utah, a place made up of slick rock, and a playground for ATV enthusiasts, but that's not why we were headed there, not this time.

When we arrived at Moab it was raining hard, and the sky was dark and bleak, I did not hold out much hope for good photographic weather, we drove into the park and watch the rain running off of the cliff faces but not much else to see in the dark light of the evening rain.

After driving around the park for a while we headed for the motel at the south end of town to check in and get ready for the next day hoping it would be a better day for photography, after checking in we drove back up north stopping at Deny's for dinner, then back to the motel for the evening.

The next morning we woke to freezing temps, but from the hotel window it looked sunny and bright, we went out to load up the Suburban and found a fresh blanket of snow on the ground, I was excited to make the trip back into Arches National Park and see what it looked like in winter, not really winter but winter snow just the same.

According to wikipedia Arches was designated a National monument in 1929, and in 1971 Arches became a National park, being part of the National park system Arches does have an entrance fee, but once inside the park there are designated parking lots, and pull outs, along with bathroom facilities.

As we drove into the park, the sun glistened on the fresh snow, and the perfect sky reflected light back onto the arches, and overhangs that live there, it was beautiful to say the least. Not many people had ventured into the park, mostly because it was off season, and not many people had come to this part of Utah so there weren't many tracks in the snow, and no one to try and avoid for the photos, parking was easy, and with the fresh snow everything looked clean and new.

At one spot there was an old cedar tree long dead, but still standing behind it you could see some of the "fins" that make up part of the sandstone landscape so prominent in that part of the Utah standing against the cloudy blue sky, all dressed in white, and shining from the sun. 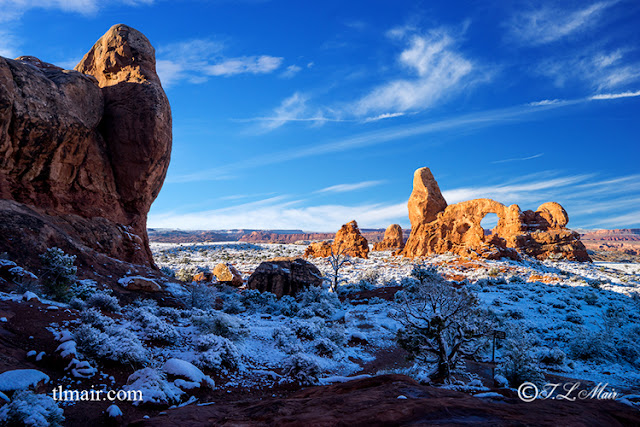 Then there was Turret arch stark, red against the fresh white of the night's snow storm, later in the afternoon, once the snow had melted and things began to warm up some we decided to make the hike to the base of Delicate arch, I had been there before, but my son had never made that hike, he decided he wanted to try and run up the steep climb just to see if he had it in him, so off he went while I took my time, I knew what I was in for, when I was almost at the summit my son met me headed back to walk the last little way with me.

When we got to the arch the sun was just dipping into the eastern sky, and the shadows were getting long. The sun landed on the La Sal Mountains in the distance making the already massive arch look even bigger in contrast, we sat down below one of the steep sandstone walls that make up the basin around Delicate Arch trying to block the wind that was blowing cold from the mountain snow, it was beautiful, and peaceful, tho more people had made the afternoon hike to the arch than had been in the park that morning.

We accessed Moab Utah, and Arches national park by taking Utah 189 to Provo canyon where it becomes Highway 89 south, then it turns into highway 6/191 through Price Utah, and down to Green River Utah where you hop on US highway 70, head east for a few miles, I really don't know how many but not very many, then exit onto highway 191 and head south to Moab, on the way you will see the exit which will take you to Dead horse point, and Canyon lands national park, both worth seeing if you're in that part of the state, and not a long drive from Moab, further south on 191 you will also see the entrance to Arches national park.  You can also access Moab by taking US 15 south then 70 east, but why would you want to do that? It takes longer and not as pretty of a drive, from the east you take highway 70, and there are many ways to get there from the south, google maps comes in handy for any of these trips.