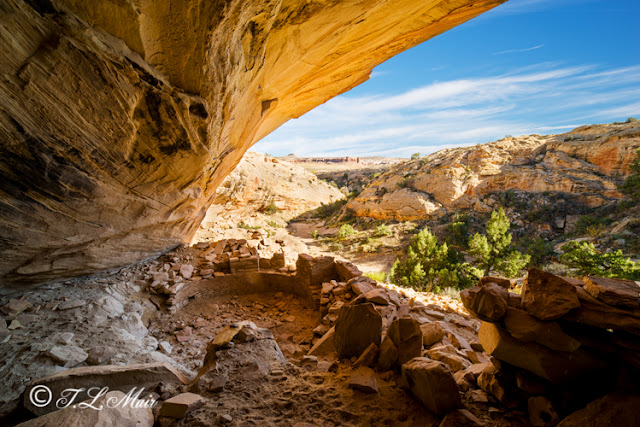 A few years ago my son and I decided to take a trip to Arches national park, in south central Utah.

We loaded up the Suburban and away we went in the middle of a late winter blizzard, as we moved south from Midway Utah towards Arches the snow slowly began to turn to rain, the sky was bleak, and gray, I wondered to myself what I was thinking to take a trip this time of year.

Once we arrived at the motel in Moab and checked in we decided to take a ride up to the park, the heavy rain had created waterfalls from the hanging canyons, and plateaus of the slick rock, they were interesting but the light was flat, and dark, and just nothing for good photographs, so I  left the camera in the bag, and we just drove around, then decided to go back to the hotel.

When morning came we woke to find freezing temps and snow, but the sun was shining and it was beautiful!!

We packed up and headed back to Arches, the red rock in the white snow was like a little wonderland, photos from that trip can be seen in my “Southern Utah” collection.

After visiting the park for the morning we headed back to the hotel, once there my son asked about Indian ruins in the area, the clerk at the front desk kindly told us about some Native American ruins on the road to Blanding Utah, it sounded interesting so we decided in the morning we would head out to that location.

We drove along the road looking for the sign she had mentioned, somehow, and I don’t really remember how now, but we got sidetracked, and found ourselves driving on an old dirt road called Butler Wash Road in the middle of nowhere.

But undaunted we drove on, searching the nearby slickrock for signs of Anasazi ruins built into the caves, finally there they were, we found them with the binoculars, we then found a place to park the suburban, loaded up the camera bag, I opted to leave the long telephoto lens in the vehicle and take a bottle of water in it’s place.

We headed off over the desert on foot, to find the ruins we had seen from the road, do you know how hard it is to find those things once you walk out there, it’s difficult at best, I walked low, and my son walked high, impossible, then I heard my son calling to me, he had found the elusive ruins.

I hiked up to his location, and there they were, across a steep sided canyon, and as far as I could tell only one way into them, walk all the way around the slickrock to the desert floor, find the entrance to the canyon and hike back up, I’m an old guy, and to be honest a little out of shape, I did not want to take that hike.

I set up the tripod, with the camera, wishing I had the telephoto lens with me, and took a few photos, not nearly close enough for the photographs that I wanted.

My son is far more agile that I am and he decided he could make it down the cliff face, not really a cliff, but it looked like one to me, I watched him as he went over the edge, and down to the bottom, then back up to the cave. The cave was massive, much larger than it looked from across the canyon.

I started looking for a way down, and unknown to me my son was looking for a better way, I decided to take his route, much harder with a backpack full of photo equipment, and a large tripod. I went over the edge and started making my way down, finally reaching the bottom of the canyon I put the backpack on my back and headed for the cave entrance.

You have to stoop a little to enter the cave, but once inside you can stand up, with plenty of room for my cowboy hat.

The cave gets its name from a cold spring that bubbles up inside the cave, I thought that was pretty good, an Anasazi cave complete with running water.

The photo pictured here is taken from just outside the wall that seals off the living quarters from the Kiva, and you can see what is left of the kiva in the foreground, and the canyon beyond that.

The photograph doesn’t do justice to the size of this structure, it is giant, amazing what it must have taken to build this thing. The top of the Kiva is gone and some of the walls have crumbled away, still stunning to see, and walk through.

Once we were done at the cave we headed out, this time taking a bit of a precarious route up and over the top of the cave rather than down through the canyon, once up on top we started looking to see if we could find any other dwellings, we did see one other structure high up in what looked like a totally impossible location, amazing that anyone could actually build something that could last as long as these things have lasted, and still be intact.

On a side note after drinking the water that I had packed, trudging through a muddy wash, climbing up the vertical wall of said wash and making it back to the suburban, which seemed like a feet in it's self at the time we decided to try and make it to another set of ruins before sunset, we made it back to the main road, and headed towards Blanding again, about 2 miles down the road low and behold there was the sign for the ruins, Butler Wash Ruins which we had been told about.

In the end I’m glad we didn’t find the sign, and took the road less traveled, we still got to see ruins, got some exercise and explored place that most people never go to, and all by accident, a happy accident.

If you find yourself in Moab and want to explore some ancient Anasazi ruins google Cold springs cave, you can find GPS coordinates there, and take that side trip you won’t regret it, and you will see a part of the amazing southern desert that most people never see.

As always I hope you have a great day!!